The story of Varibike
The company Varibike GmbH was founded in 2011 by mechanical engineer Martin Kraiss. But the development started much earlier. Martin Kraiß has always liked to ride his mountain bike across the hilly landscape of the Swabian Alb. He also did cross-country skiing, swimming, Nordic blading and martial arts. Compared to these sports, he noticed the one-sided stress on the body when cycling. "The upper body is constantly neglected and is static". So he decided to develop a fast bike that trains the whole body. He was supported in this by his father, an experienced developer whose account has pioneering patents in the industry. After trials with various drive and steering concepts, the current Varibike concept turned out to be optimal. The Varibike concept trains the whole body and its arm and leg crank drive is the most effective type of drive for bicycles worldwide. The first patent was applied for in 2005. A few more followed. The geometry and ergonomics of the Varibike have been optimized through many tests and analyzes. After five years, dozens of prototypes and several test kilometers, the current Varibike geometry was established in 2010. In 2011, suitable suppliers were selected who met the high quality standards of Varibike GmbH. Strict strength and safety tests guarantee the quality and safety of the Varibike. In April 2012 the Varibike was awarded the gold medal by an international jury of experts at the inventors' fair in Geneva. The Varibike has been mass-produced and sold since the beginning of 2012. All variable frames in this exclusive series are welded in Germany. The assembly of the finished Varibike is also carried out with the greatest care in Germany.
The photo on the left shows a Varibike pre-production model from 2010 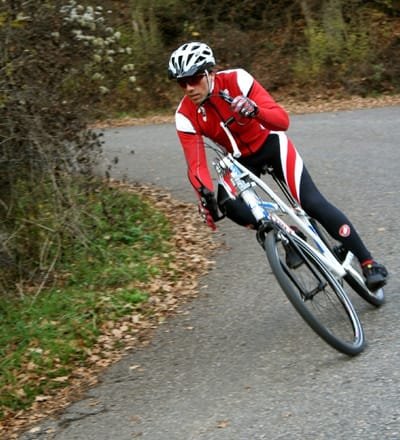